NVIDIA has been considered one of the top manufacturers of graphics cards for quite some time now. From the fabled GTX 960 Ti to newer, more powerful NVIDIA graphics cards such as the GTX 1080 Ti. In fact, NVIDIA makes such good graphics cards that many of its older models will still get the job done today as long as your processor is powerful enough and you have enough RAM.

The GTX 950 was released in August 2015, but it still allows you to play plenty of games—especially if you’re willing to lower the graphics settings a bit—and handle day-to-day tasks with ease. And the best part about installing a new graphics card is that you generally don’t need to do anything more than swap the new card for the old one. As long as your power supply is powerful enough and you have a PCIe slot and the necessary connectors available, installing a new graphics card is a breeze.

If you’re thinking about upgrading your PC with a NVIDIA GTX 950, check out this review first.  We’ll cover everything you need to know about this great budget graphics card, including the features it supports, its specifications, what you need to install it in your computer, and how well it can handle various tasks and games.

NVIDIA has been making some of the best graphics cards for decades, and many of its older models are still powerful. The GTX 950 was released in 2015, but it's still a capable graphics card for gaming and light video editing. If you're considering buying a NVIDIA GTX 950, this review should make the process easier. 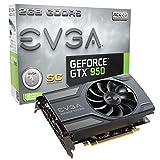 While all of the technical features of a graphics card are important, the basic numbers are a good indicator of the overall performance. The GTX 950 is equipped with 2 GB of 128-bit DDR5 memory at a clock speed of 6.6 GBps. The core clock speed is 1024MHz with the potential to boost up to 1188MHz for improved performance, and it features 768 CUDA cores. With these specs, you should be able to play most modern games on low settings as long as you have a good processor and plenty of RAM.

The GTX 950 is a dual-width card, which means it’s twice as long as compact cards that only have a single fan. This means that it will take up two PCIe spaces even though it doesn’t need to be connected to both of them. In fact, this card is a bit large overall with a length of just under 8 inches. If you have a compact computer case, you should measure your available space before purchasing this graphics card.

This graphics card may be a few years old, but it isn’t lacking when it comes to display support. When you install the GTX 950 in your PC, you get support for digital resolutions up to 5120x3200 and VGA resolutions up to 2048x1536. If you want to run multiple monitors, you can do that, too. In fact, the GTX 950 supports up to four monitors at once. You have a wide variety of ways to connect your monitors as well. The GTX 950 has a dual link DVI port, an HDMI 2.0 port, and three separate DisplayPort 1.2 ports.

Because this graphics card has an HDMI 2.0 port, you can connect a monitor with built-in speakers via HDMI to get both audio and video with a single cable.

Performance is the most important factor when it comes to choosing a good graphics card, but there are a lot of other secondary factors that matter, too. For example, NVIDIA has developed a range of technology for its graphics cards, but only certain cards support certain features. You shouldn’t base your graphics card purchase based on these features alone, but it can be a good way to narrow down your decision if you’re considering a few different graphics cards with similar specs.

One feature that’s supported by the NVIDIA GTX 950 is two-way SLI. This is technology developed by NVIDIA that allows you to use two different graphics cards without having to use two different outputs. SLI essentially allows you to add on to your current graphics processing power by adding another graphics card to help ease the burden. If you’re so inclined, you can even purchase two GTX 950s to put in your computer, although you will need to compensate for the additional power requirement.

The GTX 950 also supports G-Sync, another technology developed specifically by NVIDIA. G-Sync is designed to reduce tearing when you’re playing games or watching demanding videos. Tearing is when part of the screen freezes while the other part updates with new frames. This problem was originally handled by software like Vsync, but G-Sync is essentially a better version of that. You shouldn’t have any problems with screen tearing when you’re using this graphics card.

Another neat feature the GTX 950 offers is NVIDIA GameStream. This allows you to mirror the game you’re playing on PC on a NVIDIA SHIELD device. This means you can play your favorite PC games on your NVIDIA SHIELD tablet or on your television using a NVIDIA SHIELD TV device. If you do opt for the NVIDIA SHIELD TV, you’ll have a nice controller to use when you play as well.

One of the best developments NVIDIA has made in quite some time is the ShadowPlay feature, and the GTX 950 supports it. ShadowPlay is essentially always recording what you’re doing when you’re playing games on your computer, so you can always press a quick hotkey to record the last 30 seconds of action. Whether you’re trying to make it through an incredibly difficult level on an arcade-style game or you just embarrassed your enemy in online action, this feature makes sure you can relive the moment again and again.

NVIDIA GPU Boost is also supported by the GTX 950, and it does exactly what it sounds like it should. Remember how we mentioned the regular clock speed for this card and the maximum clock speed? The maximum clock speed is achieved using NVIDIA GPU Boost. This will improve your performance and allow you to get higher frame rates and play on higher settings in all of your favorite games, or simply prevent tiling when you’re watching a 4k video.

You’ll also get the NVIDIA GameWorks software suite with the GTX 950. This gives you all sorts of different ways to enhance your visual experience with your GTX 950 without having to go through any complicated processes. All of the enhancements in GameWorks are designed specifically for NVIDIA cards, so they’re safe and easy to use.

If you’re big on beautiful graphics, you’ll love the Dynamic Super Resolution (DSR) technology. This technology takes the game you’re playing and renders it at a higher definition. To make sure everything looks right on your monitor at the end, the game is reduced back down to a smaller resolution. While there are often problems when something is scaled down like this, DSR technology allows something to be scaled down in a way that it doesn’t lose its integrity.

The operating system you use generally isn’t an issue when it comes to graphics cards unless you’re trying to upgrade an Apple computer. The GTX 950 is compatible with Windows 10, Windows 8 and 8.1, Windows 7, Windows Vista, Windows XP, Linux, and FreeBSD x86. Because only the x86 version of FreeBSD is supported, you may want to consider a different graphics card because 32-bit operating systems like this often have a RAM limit of 4 GB. The one exception to this is if you’re confident that your system will support the amount of memory you need, as is the case with AMD systems using newer versions of FreeBSD x86.

This website also lists video cards according to which are the best value by dividing the G3D mark by the price of the graphics card in dollars. When you use this equation to figure out how good of a value a graphics card is, the GTX 950 comes in at 26.81, outscoring the GTX 960, GTX 1070, GTX 1080, and GTX 750 Ti. Not only can this card hold its own when gaming or streaming videos, it does it at a reasonable price point.

If you’re planning on using your GTX 950 to game, FPS is the most important benchmark for you. FPS tests were performed on a PC with 32GB of 2133MHz RAM, a 2 GB GeForce GTX 950, an SSD, and an Intel i7-4790K processor. The results varied quite a bit based on the particular game in question, but the GTX was able to handle most games with a relatively high FPS.

GTA V can be played on high settings with perfectly smooth gameplay with an average FPS of nearly 80. When you look at more demanding games like Far Cry 4, The Witcher 3, and Shadow of Mordor, that number drops quite a bit. Fortunately, you can compensate for this by changing your settings a bit. In a lot of cases, you can simply lower dynamic settings, such as shadows and anti-aliasing, to make sure your framerate doesn’t dip too low.

Like all graphics cards, the GTX 950 comes in various different packages depending on the brand. The brand you choose will determine the type of cooling, clock speed, ability to overclock and more. You should look for a GTX 950 with good cooling options and a good clock speed.

EVGA is one of the biggest video card brands, and its version of the GeForce GTX 950 is right in line with the rest of its products. Instead of the standard 1024 MHz clock speed with boost speeds up to 1188 MHz, the EVGA 950 GTX runs at 1203 MHz base with a boost speed of 1405 MHz. This means that you can enjoy your favorite games and movies more smoothly. It also features dual silent fans that help keep your video card cool without making all the noise that some fans make.

Most NVIDIA video cards have two versions: the standard version and the Ti version. The Ti version is essentially the more powerful rendition of the standard cards, but the GeForce 950 GTX doesn’t actually have a Ti version. Instead, you’ll have to opt for a separate card entirely if you want to upgrade. The GTX 960, 970 and 1050 Ti are all good cards that fall in a similar price range.

Buying a video card is no small decision. Chances are you won’t be buying another one for quite some time, so you’ll need this one to handle whatever tasks you throw at it. Because of this, it’s important to do lots of research before buying a graphics card.

Many websites provide tons of data on how well a given setup can run a certain game. Look for a setup that’s similar to yours with the video card you’re considering buying. If you can’t find a processor that’s close to yours, look for a worse one so you can be absolutely sure. As long as you can run a game consistently at 60 FPS or more, you shouldn’t have any problems with framerate. If you do, you can always lower the settings a bit and see if that helps.

GTX 780 Review: Is This GeForce Graphics Card For You?