The Aerocool P7-C1 Case is a mid-tower case with RGB LEDs on the front panel, RGB controller, supporting up to three radiators. Let's check it out!

The P7-C1 is part of the Aerocool "Project7" lineup, which includes cases, power supplies, fans, watercoolers, and chairs.

Figures 1 and 2 show the case.

Let’s take a closer look at the case in the next pages.

The front panel of the Aerocool P7-C1 has a meshed area in the center. Around it is an RGB LED frame.

Removing the front panel (just pull it) you see a removable air filter.

The top panel also has a mesh area, with the buttons and connectors on the front. Here, you can install two 120 mm fans or a 240 mm radiator.

On the front of the top panel is the area with earphone and microphone connectors, SD and Micro SD card reader, RGB controller buttons, reset and power buttons (with the HDD activity and power LEDs inside them,) two USB 2.0, and two USB 3.0 ports.

The bottom panel of the Aerocool P7-C1 is covered by a plastic cover, which allows the airflow inside it. There is an air filter for the power supply intake.

The rear panel of the Aerocool P7-C1 are painted in black. The power supply is installed at the bottom of the case.

This case comes with seven expansion slots, one with a reusable cover and the others with covers that must be broken to use.

Let’s now take a look inside the Aerocool P7-C1.

The left panel, in tempered glass, is held by four thumbscrews. The right panel is held with two thumbscrews.

The motherboard tray has a huge cutout for you to access the backplate of the CPU coolers without having to remove the motherboard from the case, and holes for you to route cables behind it. There is a 0.8 inch (20 mm) clearance between the tray and the right panel to organize the cables.

There is a cover for the power supply compartment.

Figure 11: a view behind the motherboard tray

In Figure 14, we have another overall look inside the case. Expansion cards are held with regular screws.

The power supply is installed at the bottom of the case, in an space apart from the motherboard area. It can only be installed with its bottom fan facing down. As shown before, there is an air filter for the power supply fan.

In Figure 15 you see two more 2.5” bays located under the motherboard tray.

In Figure 17 you see the accessories that come with the case. The highlight is the 15” (390 mm) long LED RGB ribbon, that you can install wherever you want. This ribbon lits on the same color of the front panel, and you choose the color and flash pattern on the buttons on the top panel.

Figure 18 shows a complete PC built on the Aerocool P7-C1.

Figure 19 shows the system on, with the LED stripe over the PSU cover. The controller allows to choose eight colors, changing colors in sequence, or turned off. It also supports always on, pulse, or "breath" patterns.

Figure 19: lights on
The Aerocool P7-C1 differs from most cases because of its look, by the tempered glass left panel (on the tested version), the construction quality, but mostly by the RGB front frame and the RGB controller.

It has plenty of internal space for video cards and liquid cooling systems. The power supply and the hard disk drive bays under a cover also help to keep a clean look inside the computer. 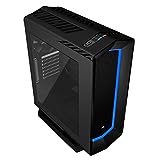 The Best External Hard Drive for PS4: 10 Choices to Expand Your Storage

How To Choose the Right KVM Switch