Input devices come and go, but the keyboard has been part of the personal computer scene since its inception. CHERRY is one of the world’s leading manufacturers of computer input devices. This German company has been producing high-end mechanical keyboard switches and high-quality keyboards for more than four decades.

Keyboards have not changed much over those decades and the Cherry G80-3494 MX Silent keyboard that I have been using for the last few months is actually a throwback to the 1980’s.

In fact, this keyboard looks like it could have come with one of the IBM PCs from the 80’s. It has the same layout as the 101 key enhanced keyboard that was introduced by IBM in 1986. The only change is the addition of three Windows keys bringing the total number of keys to 104.

Both the keys and keyboard body have a textured matte finish. My review unit is good-looking with black keys adorned with large white markings against a dark gunmetal-gray base. A white version is also available.

Although the keyboard is fairly sturdy, it has a plastic frame instead of metal, allowing it to have a slight bit of give when you press on blank areas. Like the old QWERTY keyboards of the 80’s, this keyboard is big. It measures 18.5″ x 7.67″ x 1.73″ inches. Using plastic has one advantage, this keyboard weighs only two pounds, which makes it a lightweight compared to some other mechanical keyboards.

The retro effect is enhanced by the fact that it is a corded keyboard that comes with a 68” cord. Although the keyboard is USB 2.0, it comes with a retro PS/2 adapter. This might be handy for some, but hopefully, most homes and offices have moved away from that old technology by now.

On the upper right side, above the dedicated keypad, there are little blue LED lights that are indicators for the NUM, CAPS, and SCROLL lock buttons. The keyboard also has two height adjusting legs that pop up on the back. They lock into place making the keyboard quite stable for typing. The USB interface makes this keyboard usable for both PC and Mac. 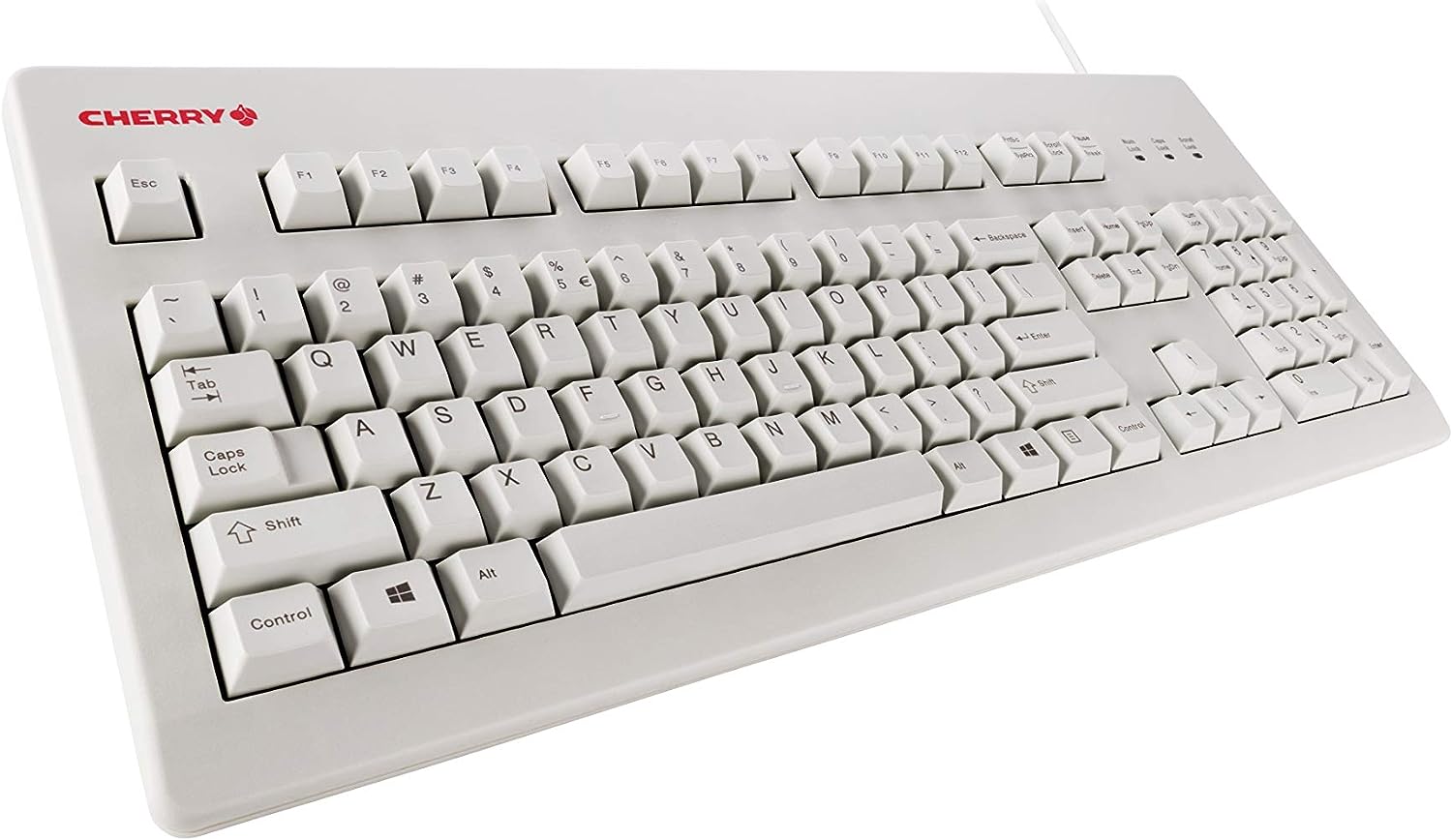 The CHERRY MX Silent keyboard is based on the CHERRY G80-3000 model. This has been one of the most popular mechanical keyboards on the market for decades. This tried-and-true model has proved itself to be reliable and precise. In my testing, the CHERRY Silent confirmed its sturdy heritage with excellent touch.

They are also known for the click-clack noise they make as you type, but this is not something that people fall in love with. Because of this, CHERRY has added new MX Silent switches to this keyboard. The patented integrated 2-component stem system minimizes noise at the top and bottom-out. The self-cleaning contacts are dust and dirt resistant.

Mechanical-switch technology cannot produce the quiet touch that some rubber-dome switches can supply. So you can’t expect this keyboard to be truly “silent.” And although it is not entirely silent, it is quite quiet for a mechanical keyboard. CHERRY has focused on creating mechanisms for office use. This keyboard would certainly keep the keyboard noise down in a hectic, open-office-space. It would, however, also be perfect for a home user who prefers a mechanical keyboard but would like to keep the click-clack noise down.

CHERRY produces these keyboards with two different MX Silent switches: Black and Red. (The color refers to the switches themselves and does not affect or indicate the color of the keyboard). Each is identical except for the traveling distance which indicated the distance needed to push the key to enter a character reliably. The Silent Red is a linear switch with a traveling distance of 4mm, an actuating distance of 2mm, and a required force of 45 cN. The much stiffer Silent Black differs, with a required force of 60 cN. I was happy to find that CHERRY sent me the Silent Red since it required a lighter keypress that makes touch typing easier.

As a touch typist, I love the feel of a mechanical keyboard. It allows me to type faster than I can on what I consider “mushier” keyboards.

The CHERRY MX Silent keyboard is not totally silent. However, the keys are significantly quieter than on traditional mechanical keyboards. The keyboard performs this task without sacrificing the mechanical keyboard feel. The patented noise reduction technology is amazing.

I found only tone thing that detracts from this keyboard. The fact is that this is a very plain keyboard. If you’re looking for something with more bells and whistles like the Thermaltake Challenger Pro Keyboard, this isn’t the keyboard for you. As a writer, I can relate to its simplicity. However, as a computer user, I bemoan the absence of the media keys that I use fairly often on other keyboards.

I realize that CHERRY was trying to create a retro feel to this keyboard and they succeeded in doing that. However, I feel they could have added some media functions to the F-keys which would make this keyboard more useful.

This is a simple keyboard that isn’t flashy or fancy. There is certainly something to be said for that. If you’re used to working on mechanical keyboards, you’ll feel right at home with the Cherry MX.